last week betina came to visit. we decided to go to borneo for a long weekend to see some wildlife and chill on the beach. just in case anyone is interested, borneo is the third largest island in the world and is divided among three countries: brunei, indonesia and malaysia. in the eveing of the friday last weekend, we left for kuching, located in the malaysian part sarawak. kuching means the cat city and there were statues of cats everywhere. not that many real cats though.

when booking the trip, we realised that we could stay in a really nice hotel for almost no money at all. ended up staying in a four star hotel called the grand margherita. i did of course think that would mean they had amazing margaritas, but soon realised it had no connection at all (this is of course a stolen image from some website somewhere).

on the first day we went to damai beach. it was nice to have a really chilled out day and we stayed there (from quite late seeing that we slep until almost noon) until the sun went down. very tasty sipping on a cold tiger beer while watching the sunset. 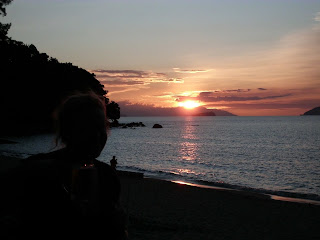 the following day, it was time for the big adventure! we were going to see the orangutans. had to get up at an uneartly hour to have time to take advantage of the nice breakfast buffet before leaving. and off we went in the rain. first thing we saw when getting out if the mini bus was an orangutan in a tree. wohoo, good sign! our guide lee, told us we were lucky it was raining as the orangutans were more likely to come down to the feeding area when it wasn't as warm as the previous days. unless it started raining a lot. which it of course did. no orangutans at all at the feeding area and th whole group of hopeful people started to slowly walk back in the rain. but.. half way back to the parking, some orangutans appeared, swinging themselves in the trees. and all of a sudden there were orangutans everywhere!

most spectacular was the orangutan they called big mama. she showed up with her little baby and sat there for us to look at her. apparently, she was not a very friendly orangutan having bitten many of the rangers so they were quite cautious to let us get too close. still managed to get some good shots and this film:
after the orangutans, we went to a crocodile farm. not a big hit. the farm was dirty and they didn't seem to take care of the poor animals. we watched the feeding and the guys feeding the crocodiles were really mean, making the crocodiles jump for food just to take it away last minutes. we also saw some monkey and there were litter in their cages and one of the monkeys was alone and his cage and seemed incredibly lonely.

we also managed to time the world cup in wakeboarding, which was quite cool. not that we say much of it, but there was a big hullabaloo with fireworks and a ragatta. 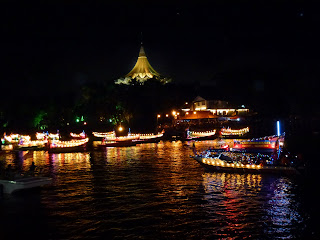 our second day trip was to bako national park, where we saw three types of monkeys, snakes and lovely rain forest and beaches. we managed to get the same guide and he was very knowledgeable, taking us around the peninsula. or not really around, we went for the shortest trekking path they had as the sun was shining and it was boiling hot. 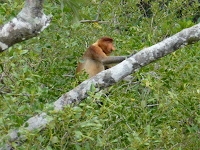 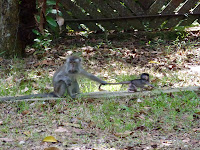 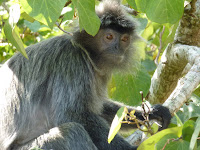 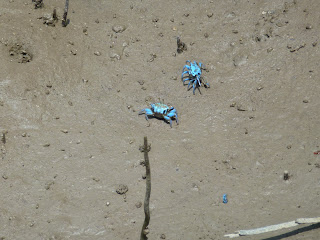 finishing off the day trip, we went on a little trip with the boat to see one of the other beaches. 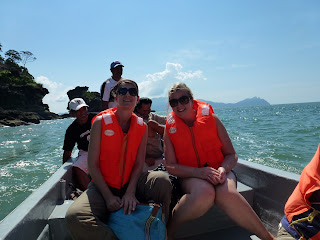 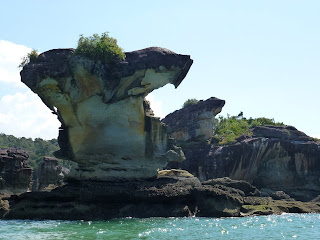 but the trip was not only wildlife and nature. we also went to some lovely restaurants - the junk restaurant and bla bla bla. funny names. gladely could have stayed at least another couple of days, if not weeks..
Posted by elin at 22:41