ok, there might not be five wrongs in this ad, but at least one and that's a big one!
Posted by elin at 13:24 3 comments:

time passes by so quickly and i realised it was a while since my last proper blog post.

according to the chinese calendar, we are now in the seventh lunar month. this is the ghost month and celebration of the hungry ghost festival. to pay homage to the deceased, who are believed to visit the living, people make food offerings and burn paper. this started about the same time as the riots in london and, before i found out why, i almost thought there were (very friendly and calm though) riots here as well. 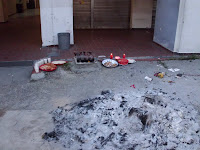 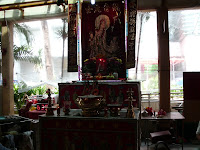 another reason for celebrations was the national day and singapore's 46th birthday. this was the ninth august and a very nice day as it also turned out to be a public holiday. there was a parade and a real hullaballoo with a play in something like seven acts, a military show and lots and lots of fireworks. we watched the fireworks down by the river, together with the rest of singapore's population. 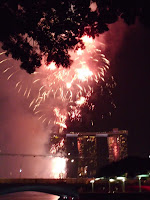 thanks to the great risks i have been taking (like posting that note on the internations forum!), i have been rewarded with the company of some really nice people, a.k.a. my new friends. we've done a lot of nice things lately. a couple of weeks ago, we went to an island outside singapore (artificial, but still very nice). it's called kusu island, which means turtle island. 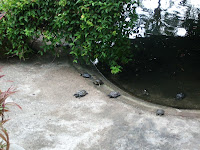 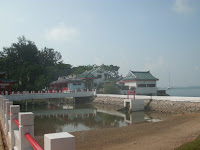 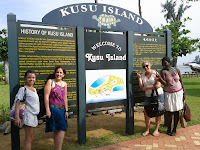 the weather here in singapore is really strange sometimes. for example when we were lying on the beach, the light breeze started to be more like a stronger wind and all of a sudden the sky was full of dark, dark clouds. we gathered our things and managed to find some shelter (not very difficult on an artificial island where there are small kind of huts everywhere). it looked like a storm was coming our way and we could see how it was raining further out to sea. was looking forward to a heavy shower, but nothing came. other days, it can be sunny, barely a cloud to be seen and half an hour later the rain is just pouring down. i've realised i have nothing against rain as long as it's not cold. the rain here is just wonderful, not to mention the air afterwards - almost fresh and crisp. 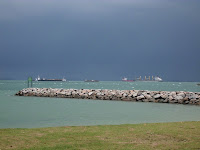 last friday, we went to the monthly internations event. they had managed to reserve one of the most spectacular venues in singapore, the roof top bar ku dé ta at marina bay sands (the boat bit in the picture below). amazing view over singapore. unfortunately, they squeezed in too many people, but it was a nice evening. 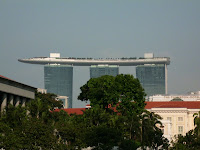 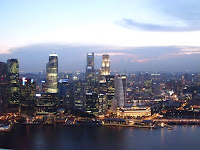 on sunday, we went to the macritchie reservoir and had a walk in the forest. really close to the city, but still very green and nice. saw some monkeys and went on a tree top walk. 27 metres up amongst the tree tops. 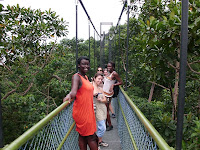 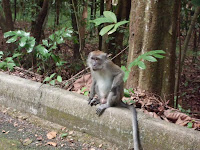 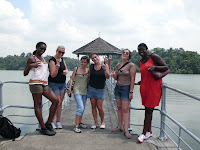 it's not only the seventh lunar month and our eight month, but also the ninth month of the islamic calendar and thereby ramadan. half of the girls in the office are muslim and today, they brought me to a restaurant in arab street to join when they broke the fast at sunset. we had really nice food, among other things something called murtabak, which is kind of pancakes with meat - really nice! 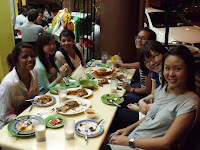 after that we went to the night bazar and had a look. very crowded and lots of different clothes, mainly malay, indonesian and arab, textiles and food. the streets were also decorated with lights, just as we do for christmas. it's very interestng being in a country with such a diverse population. the most obvious to me is the variety of food you can get, everything from chinese food to indian food, but also all sorts of different western food. the national holidays reflect the many different religions in the country as there are muslim, christian and chinese holidays (and probably some more that i don't know about). 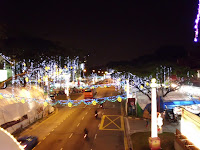 the rest of the week will be quite busy with a lot of international events. tomorrow, i'm going to a pub quiz, on thursday to a swedish after work, friday drinks at the american embassy, saturday french picnic in the botanical garden (i.e. with cheese and wine) and then to a jazz café in arab street. busy week, but looking forward to it.

finishing off with a funny picture of some of the things you could buy at the market.. i mean, who wouldn't want a perfume by hogo boos? 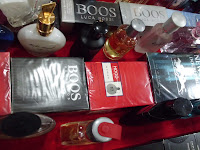 ps. they called me from the medical centre today to let me know i can pick up my results..

i have received an in-principle approval on my visa application. all i have to do now is a medical examiniation, including hiv test and chest x-ray. exciting..

i've been here in singapore for a bit more than a month now. still don't have an employment pass, which is what they call the visa i need. for some fortunate reason, i got a 90 day social visitor visa upon arrival so i am still legal. kind of. just not allowed to work. which i am of course not doing.

about a month before leaving, we started filling in the 5,000 page application (ok, maybe not that many, but a lot of pages). it took about 300 years (ok again, maybe not a full 300 years, but quite a while). all done and the only thing left was to submit the application.

this is where it starts to get complicated, singapore style..

the application had to be submitted online. the company had to register for an online account. an admin user had to be appointed. this user had to be a freedman employee with a singaporean identity number. the user couldn't be registered as an admin user for another company. this is where the problems start. elyne, the appointed admin user and also the only freedman employee in singapore with a singaporean identity number, was already registered as an admin user for her former company. to de-register, someone from the former company had to sign a form. her old company is liquidated and there is no one to sign the form. she wrote a letter to the authorities explaining the special circumstances. didn't hear anything back. at all.

when nothing had happend after i'd been here for four weeks, i decided to go to the ministry of manpower, as it's called. they gave me a form, told me to fill it in and tick two boxes. i did and sent the form to london to be signed and that was it. easy, i thought. the next day they called me. my form had too many ticks and there was absolutely no way they could disregard one of them (not even after i explained they had instructed me to tick those two boxes). the new form also needed a new signature. everything else was fine. so i filled in a new form, sent it to london for signing and submitted. the following day they called me again. there was a form missing. no, nothing they could have told me the day before, they were only looking at the first form then.

anyway, on monday we received the pin code needed to activate the account. this is being done online, but the website is only available between 8am and 8pm, monday to friday.. yesterday was the national day and it was of course not accesible. elyne managed to activate the account yesterday. only to discover that the 5,000 page application had to be filled in again. i spent some time filling it in (as i had already filled it in before, it only took about 100 years this time), but the last step was to pay and figured i couldn't do that myself when elyne is the one who has to submit the application. so.. today, she logged in, payed and submitted the application!

all that's left now is to wait and if everything goes according to plan, i reckon i should have the visa before i leave.
Posted by elin at 23:47 1 comment:

i have made some food and drinks observations lately. for example, compared to europe, things here are quite unproportionally priced. so in order of importance:
* s$10 is about £5 or 50 kronor

as you can see, you can also be fined for just about anything. the other day i heard someone say that singapore is a fine country. kind of typical göteborg humour. i like it a lot.

these observations leed me to the conclusion that you should (not smoke at all) only drink on wednesdays and only eat chicken rice, but not on the mrt.

this is what chicken rice can look like (if you're lucky)
Posted by elin at 21:52 2 comments:

ok, that might be slightly exaggerated, but when last weekend was fast approaching and my only plan was to paint my toenails, i thought it might be time to make a serious effort to meet some people. so i stepped out of my comfort zone.

i had been invited to a facebook group for expat girls here in singapore. one of the girls posted a note about friday drinks and i decided to go. pretty strange feeling to walk into a bar looking for some girls that i didn't know what they looked like. luckily, i found them without too much trouble. for a group of about 135 members, the attendance was quite low - only three of us showed up. still a nice evening though.

on the saturday, after completing the weekend mission (very nice purple colour by the way), i had gotten a taste for this whole socialising business and posted a note on an expat community site (internations) forum to see if there were any like minded people out there somewhere. i'm thrilled to see a lot of people reply and i am now finally starting to build a social life here. met up with some really nice people on both sunday and monday, have a ladies night tomorrow and all of a sudden i am organising friday drinks this friday. nice.

so what's the conclusion of this? well, as i see it - there is no point staying in your comfort zone if it's boring and lonely.
Posted by elin at 21:53 5 comments: