for the ones who realise which song i refer to in the title, i can tell you that it's not raining men. just a lot of water. all the time. we had such a nice plan for today - to chill out by the pool in clara’s condo. judging from the amount of rain over the last few months, it might have been a somewhat over optimistic plan. 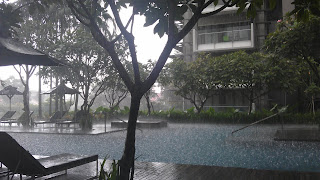 it looked bright for a bit though. didn't even start to rain until about five minutes after we got there. so after wasting the part of the day when it was not raining shopping for a winter jacket (which feels like a very odd thing to do when it’s 32 degrees outside, but just realised it's like 7 degrees in shanghai and a cardigan may not be sufficient to keep me warm), we spent some time by the pool, in the rain - watching the lightning and listening to the remarkably loud thunder.

i realise that my perception of singapore as a sunny place might have been so strong that even when i read the climate section in my guidebook, i just blanked out that 'rainfall is highest' could actually mean it would rain all the time. only now when i had a look in the guidebook again, just to (hysterically) laugh at and condemn its unreliability, it became clear to me it actually did mention it would rain. i hereby quote the guidebook:

"Singapore's temperature remains fairly constant throughout the year, with an average high of 88° F (31° C) and relative humidity of 85%, Rainfall is highest from November to January and lowest in June and July."

looking back now, i think i was fooled by the mention of constant temperature and humidity. probably a normal beginner's mistake for someone who's from sweden and has lived in the uk for a couple of years. in both countries rain normally equals cold. at least i have now learned to never leave the house without an umbrella wearing other shoes than flip flops.